Hello, folks. Last time we explored unique venues on the west side of the Columbia Gorge–the area from Troutdale OR and Washougal WA to the west to Hood River OR and Bingen/White Salmon WA on the east, the “wet side” of the Gorge. Today we head further east, where damp Cascadia transitions into High Desert. We’ll explore event venues in the Columbia Gorge east of Hood River and Bingen/White River to the east end of the Columbia Gorge National Scenic Area in Biggs Junction OR and Maryhill WA. Many venues can be found in The Dalles, Oregon, the largest city in the area.

Sunshine Mill Sitting at the east edge of downtown The Dalles, this unique venue occupies what is the tallest building in all of the Gorge. This former mill was owned by Sunshine Baking Company and the wheat milled within was used to make Cheez-Its! Nowadays it is home to two wineries, Quenett and Copa Di Vino. The interior still has some of the industrial remains of the mill. The exterior has a sunken amphitheater. You can rent their indoor or outdoor spaces for weddings and other special events.

Maryhill Museum of Art At the very east end of the Gorge and just west of the community of Maryhill, Washington, this grand museum was initially constructed as a residence for businessman Samuel Hill. When his family didn’t want to live “in the middle of nowhere”, it became a museum instead. The museum features an eclectic collection, including a collection donated by Queen Marie of Romania, sculptures by Rodin, and indigenous art. And it’s also a great place to have an event. The M.J. Murdock Charitable Trust Education Center features a meeting room that holds up to 75 seated and 100 standing. The exterior is also available for events, with the splendor of the Gorge as backdrop. Be warned, however, it can get quite windy outside…

Columbia Gorge Discovery Center Lastly but not leastly, we head to the eastern Gorge’s premier history museum. Located just west of The Dalles, the Columbia Gorge Discovery Center offers a variety of options for events for personal and business use, from 25 to 400 people. The River Gallery features an impressive view of the Gorge outside without having to face the wind. Don’t forget that the museum features a Raptor Center with 7 different birds-of-prey. You can set up a private raptor demonstration and meet with Josephine the Owl!

There are many lodging options in the Gorge. We’ve highlighted a few below:

Transportation to the Columbia Gorge

Most people arrive to the Gorge via car. Nevertheless, there are other options! Please see the Part One of event venues in the Columbia Gorge for details on getting from Portland to Hood River, as the info below mostly covers how to get east from Hood River to The Dalles.

We hope this post helps you find unique event venues in the Columbia Gorge!

EJP Events has recently been featured on a few event planner podcasts, so we’d like to share them with you! I hope you give these worthy programs a listen and let me know what you think.

Here’s the first one, from March 2021: The show is called (in-person, virtual & hybrid) Events: Demystified. We’re on Episode 31: The Importance of Time Management and Friendors When Planning a Virtual Event . Anca Trifan of Tree-fan Events has been leading this podcast for over 2 years, and it was so great to work with her on a large virtual event, then to go on her show and talk about it.

And the other, from July 2020. This show is called Miracle Workers: A Podcast for Meeting Planners by Meeting Planners. Episode 14, Using Events To Change The World. Amanda and Darryl have been producing Miracle Workers since 2019 as well, and their topics range from “Wi-Fi pricing to last-minute requests for kosher, vegetarian, gluten-free, low-salt meals.” The episode we are on dealt with diversity, and why it’s important to change the world through inclusive events – right up EJP Events’s alley!

In addition to these two podcasts that EJP Events has been featured on, here is a list of some other event planner podcasts that you might be interested in, whether you are in the profession of event planning, wedding planning or production; or thinking about it as a career.

Do you have a favorite event planning podcast you want to share? Or helpful tips on how to stay up on the latest event planning news? Leave us a comment, please! 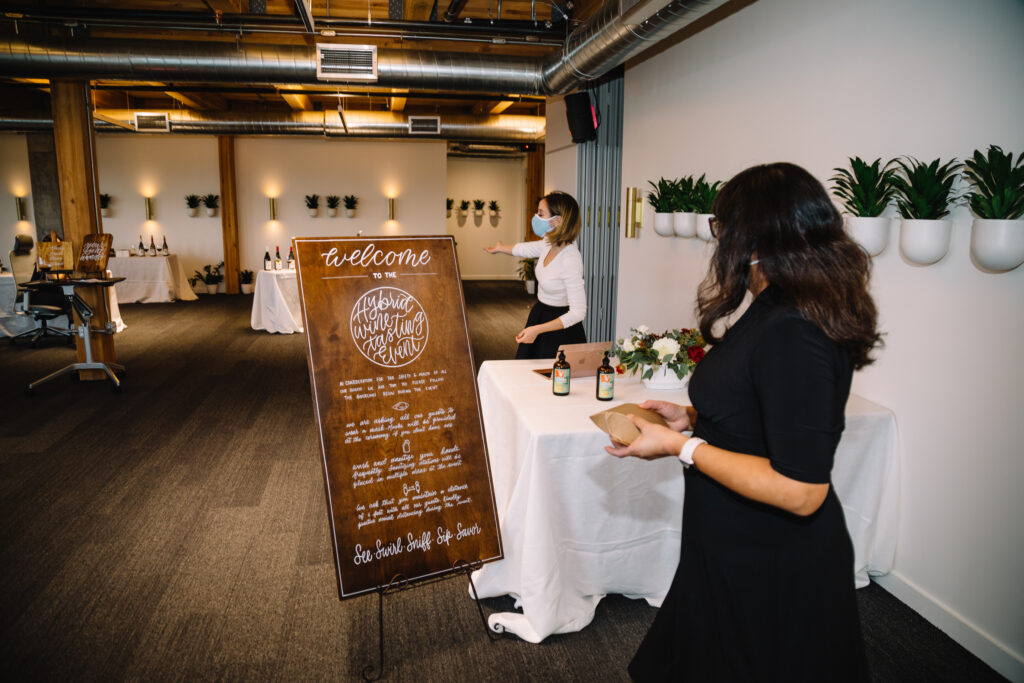 Tom Cook Photo – Katherine O’Brien of EJP Events demonstrates the physically-distanced method of passing out conference swag at a small hybrid event with 4 people in attendance at Skyrise. Signage and props by The Fresh Hues; Floral MixMod; Rentals The Party Place

While the Christmas personal shopping rush is winding down, the winter/spring 2021 conference and gala season is just heating up. Hundreds of fundraisers, seminars, symposiums, annual conferences, and board meetings are held between January and June every year. Most of these in 2021 will still be virtual due to COVID-19 still rampant in our communities. A conference or business gift brings tactile experience into the virtual and hybrid event world, making it interactive, engaging, and more likely to be remembered.

We love to give and get gifts – who doesn’t? This year is markedly different as many of us have been isolated from colleagues and friends; and we haven’t been attending meetings and events to keep us connected in our business relationships. Even though we’re heartened by news of a vaccine, it will be months before it’s widely available enough to change what’s happening with hybrid and virtual events.

I produced this corporate event gifting guide to make it easier for you to find the local Portland businesses creating unique gifts for corporate and social events. I hope it helps you support small businesses (especially those that are BIPOC-owned), and helps you reach out to your friends, clients, and colleagues with a little something to spread cheer and let them know you’ve been thinking about them. Whether it’s conference swag, a personal touch for a nonprofit gala, or a wedding party favor, there are so many reasons to celebrate in 2021 with a token of appreciation and affection. 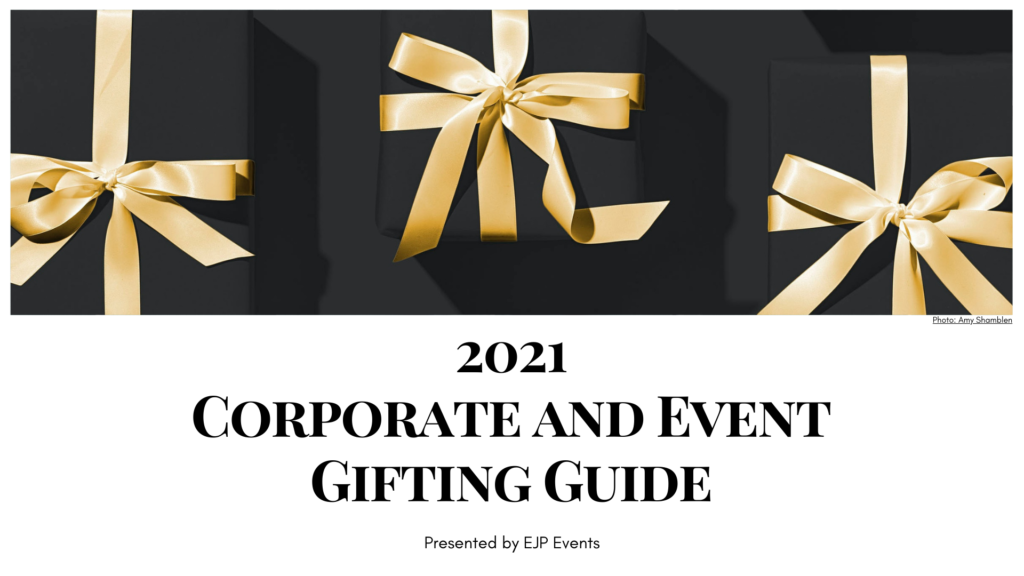 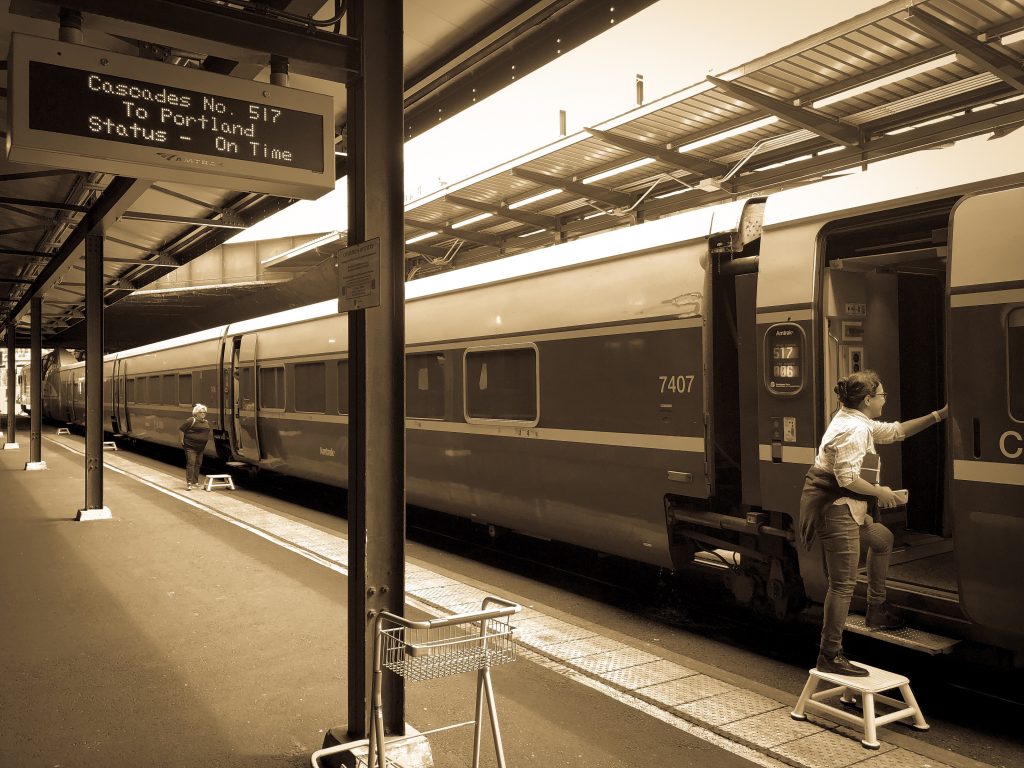 Looking for a unique spin on an event? Why not use a train for your event!

Amtrak, America’s national rail provider, travels to over 500 destinations around the country. It may not be the fastest way to get to where you need. But it’s a trip lacking  the hassles of airport security and driving stress. And it’s not always about speed. A train trip on Amtrak’s Cascades from Portland to Seattle takes about 3 1/2 hours. While it’s possible to drive there in slightly less time, taking the train avoids the nightmare that can be Seattle rush hour traffic. (Not to mention parking!) Plus, there’s the romance of arriving at your destination in a historic station in the heart of the city.

Going further? A long-distance train journey is a great way to relax and unwind. You can get mesmerized by the scenery going by, even in so-called “boring” places. You’ll be able to accomplish a good deal of reading, writing, or drawing. Think of those things you probably don’t have the time to do in your day-to-day life. You’ll now have the time! Want a comfortable night’s sleep? Book a room in a sleeping car, where attendants will make your bed every night.

Trains for a long-distance event

There are many options for one to incorporate rail travel into an event or wedding. Here’s a few ideas:

Trains for a local event

Maybe you’re not going to travel a long distance but still want to use a train for an event? There are many tourist trains and historic museums scattered throughout the US. While most of these trains are short distance day trip affairs, but some offer longer journeys. Here are some options for the Portland area:

As you can see, there are many ways to use a train for your event. Using rail will make your event stand out!

It’s been a long-held wedding tradition: Save the top tier of your wedding cake, wrap it up, stow it in the freezer, and eat it on your first wedding anniversary. This tradition goes back through the years, growing out of a time when wedding cakes and baby christening cakes were basically the same thing, and couples usually had a baby within a year of their marriage. It made sense to save part of the wedding cake for the latter event. It also helped that these wedding cakes back then were primarily fruitcakes, which did not require refrigeration to prevent spoilage.

Like many “traditions”, saving part of the wedding cake is one that we think is going away. You do not have to do this. A lot of bakers nowadays are providing a free anniversary cake one year later — ask your baker if they will do this. No matter how well you try to preserve the cake, it’s not going to taste as good as it did on your wedding night. Or, just go out for a nice dinner and dessert on your anniversary. It’s up to you!

If you really want to hew to tradition, wrap it really well in plastic wrap and then in an airtight container. You should put it in the freezer that night. And then yes, on your anniversary (or the day before) you would thaw the cake and have it for dessert.

But again — we feel that this is a super optional tradition and most people these days do not do it. 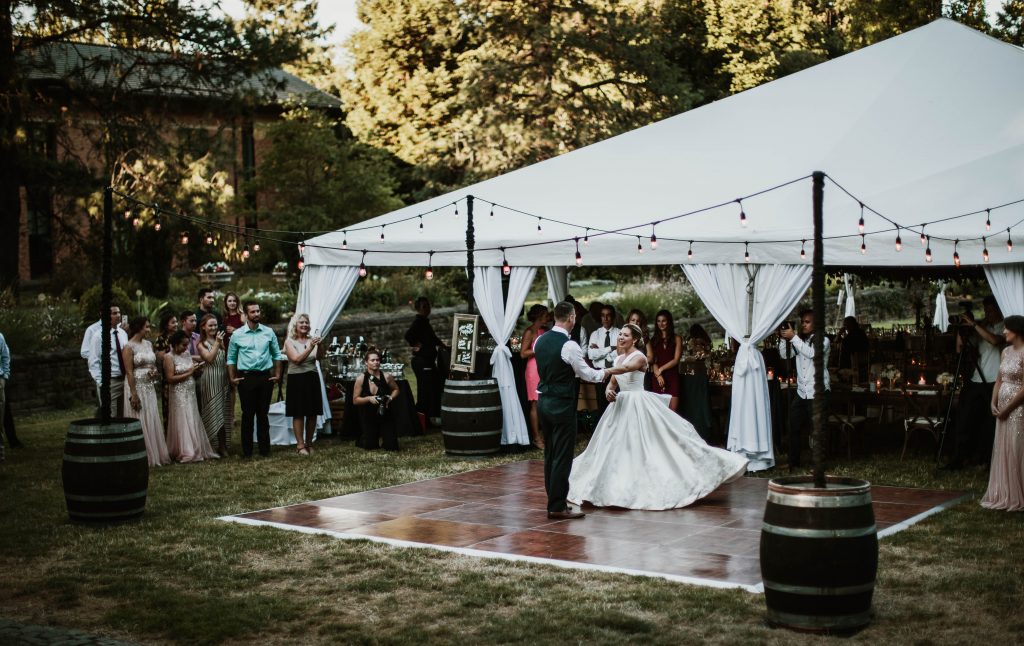 Photos by Rachel Veltri PhotographyThis time of year when everyone is taking stock of the past and looking forward, I often go through the more recent photos and relive some of the best moments. Shiloh and David’s wedding was a high point of a wonderful summer season. 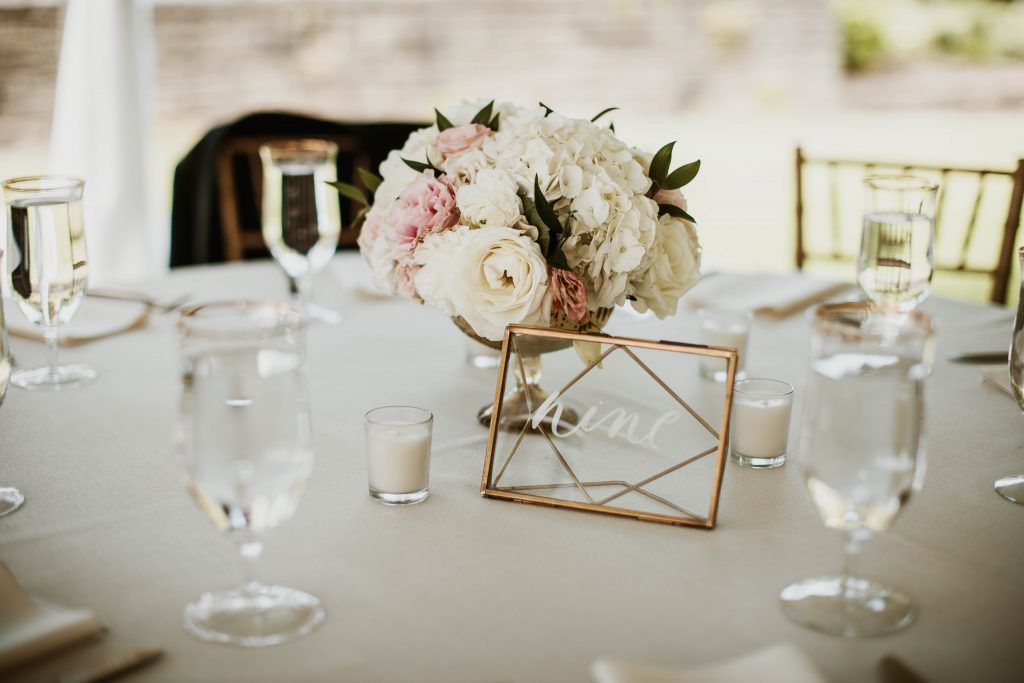 I was thrilled that both Rachel Veltri Photography and Outlive Creative were kind enough to share with me the still and motion images from Shiloh and David’s elegant garden wedding at the Lewis and Clark College Historic Estate. Shiloh and David initially contacted me when they were living in another state but moved to Oregon prior to the wedding. Many of their guests traveled in, and we had several hotel blocks as well as shuttles. In many ways it was an Oregon destination wedding. 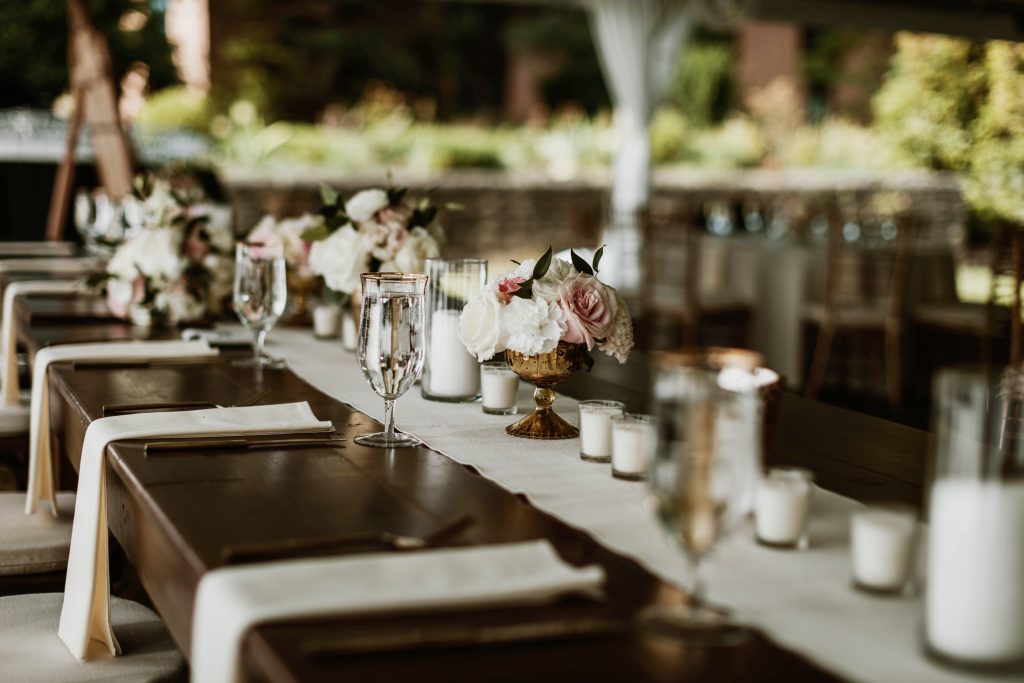 I won’t try to describe what pictures can tell in much more detail. Suffice it to say it was a beautiful day full of love and celebration. I was so glad to be a part of it.

If you would like to view more photos and see what an effortlessly elegant Lewis and Clark College wedding looks like, please visit the gallery at https://rachelveltriphotography.pixieset.com/g/shilohdavid/